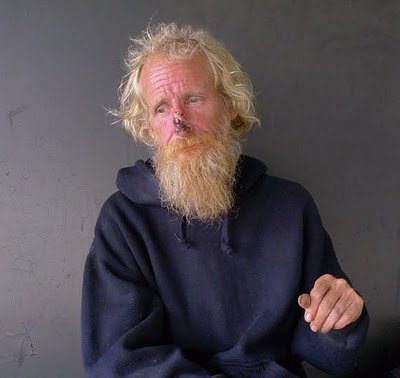 A passion play in one photo. Gorgeous.

Again Kevin what a beautiful image. It is heartbreaking and moving and at the same time hard to take. Great.

Leonardo da Vinci used to find interesting faces and follow them around the city--literally tail them through the streets and alleys--just to draw them.

FYI - I've run into Ward several times in the past year, both downtown and near Union Station. On Sunday I gave him a few bucks and a few cigarettes, we talked for a bit. I asked what happened to his nose and he said, "It got sunburned,(sigh)..and then it got infected..." I didn't take his photo, it seemed too exploitive.

But finally, when we crossed paths a third time, it seemed like somebody was trying to tell me something. And Ward certainly had no objections to more cigarattes and a few more bucks.

he almost looks like a monk. angelic, tragic, a statue whose nose got chipped over time. very mixed feelings about this photo.

It might be a relief for him to express both his misfortune and his emotional state. Beautiful, sad portrait.

Fabulous photos on your blog here, I really like them!

Very difficult decision to make, Kev. As usual, it is a great portrait with visibly deep emotion.

There's something kinetic about this photo, and something quiet.

What Paula said. And everybody else, really, about tragedy, beauty, and some kind of religious theme. Very powerful. Your method (worrying about exploitation) is very, very worthy of respect. I've gotta get in the habit of dropping in here.

yes, like a monk - actually your photo made me think of a painting by Rublev (and Tarkovski's Rublev)...