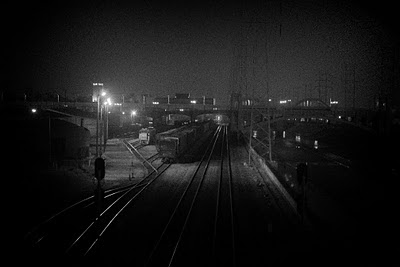 Having grown up around them, trains have always represented a kind of sweet solace for me, and this photo captures that feeling perfectly, like it comes directly out of my childhood (or the noir flicks of my childhood). Thanks for it.

Kevin, what a beautiful image! As always, love your light and the way you use it to create a mood.

Wow! Fantastic. Looks like you did go out in the rain. I dream about taking a photo like that.

The shot I want to get one of these days when I am a passenger on the 405 at Alameda during rush hour (during winter) - not likely to happen, but... is of the Dolores Locomotive Repair Facility...http://www.chasingsteel.com/blog/2010/2/20/union-pacifics-ictf-an-amazing-complex.html - it look wonderful from the freeway in early evening.

If you get a chance please peek at http://mostlylacounty.blogspot.com/.

I had a boyfriend my last year in college whose ambition was to be a hobo for a while after school, to ride the rails the way they did in the old days. I wonder if he did it.

Gorgeous grain. Was that a high ISO, or a treatment?

Since you have some train lovers here . . . David Means has a fascinating short story about hobos; it's titled "The Junction" and is now in Ecotone, a lit magazine from UNC-Wilmington. It will be in his next book, The Spot, coming out May 25. (That must sound pedantic, so I'll add that it's the only David Means I've read and my first look at Ecotone).

K, your photo grabs me more than I can explain. Yes, trains are full of romanticism, and the photo is full of atmosphere, and I agree with the others about light, mood, and timelessness. But that doesn't seem to explain why I like the shot so much. I guess the bottom line is that I really like the photo.

Wow! Great mood on this. Incredible.

Coincidence. Before I saw this image, I told a friend today that when I was a kid I often went to the railway station where I grew up and just looked at the trains. I was not interested in trains as such. Many kids where. They had little model trains. I didn't. I saw them more as symbols and proof that there was a big world out there. I grew up in Gothenburgh, Sweden. Trains went to Paris, Hamburg, etc. Metropolis on the European continent. I longed out. My grand father was a station master by the way. Well, it's powerful picture which conjures up memories of my childhood no doubt.

Hullo, thanks for your comments on my blog. I rather like this image; it has got a real atmosphere. Really impressive.