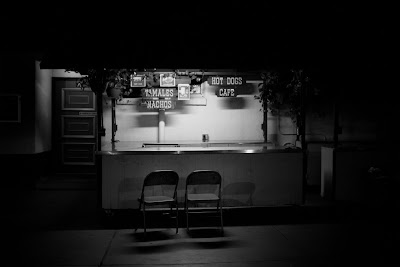 "We have reservations for two at midnight."
V

The strangest cafe I've ever seen. Doesn't look like there is a morsel there to eat. But, the chairs await.

I've seen similar places not too far from LA city hall doing a land office business during the day.

Another nice one Kevin.

Beautiful one, once again a great shot and eye.

One of the many reasons I like this photo is, the chairs look like they're waiting to be fed.

Those chairs look like an old couple who are very comfortable with each other.

I love that the two chairs make four shadows.

What a world, that such a place exists in.

The door opens. The play begins.

Too cool. If it had wheels it would be just like the truck that I used to get my lunch from in Santa Ana. I like the mystery that's in this picture.

Splendid.
I gave you an award...