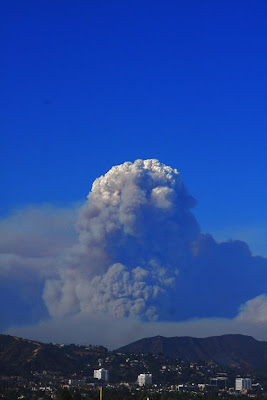 According to LA Observed, local television coverage of the fires has been non-existent.

Here are some blogs that have picked up the slack: Altadena Hiker, Pasadena Daily Photo, Glimpses of South Pasadena, Pasadena Adjacent, West Coast Grrlie Blather and the most wide-ranging would be Altadenablog.
Posted by -K- at 7:46 AM

Beautiful. Another example of how a true artist can transform even tragedy into great art.

where is your vantage point?

So creepy. Yet, you've captured it wonderfully.

I took this from the top of The Grove parking structure (8 floors high)in Hollywood.

If you had told me this is a mushroom cloud from a nuke attack, I might've believed it.

It looks like there was an explosion more than a fire.

This kind of cloud is called pyrocumulus. According to wikipedia, "Phenomena such as volcanic eruptions, forest fires, and occasionally industrial activities can induce formation of this cloud. The detonation of a nuclear weapon in the atmosphere will also produce a pyrocumulus in the form of a mushroom cloud which is made by the same mechanism."

Always happy to give a shout out to a fellow blogger! And congrats--saw this pic on LAist earlier today! :)

I think yours takes the cake, so to speak. It is a gorgeous thing. (Unfortunately, as Karin says.)